What's in a Name?

A couple of weeks ago, Les and I drove back from Parkes along the back roads, as you do when you are retired and have all the time in the world. The trip took me on roads I’d never been on before, and through towns (or tiny little villages, to give them their correct description) I’d never heard of, let alone visited. It was a really pretty trip, but it got me thinking. There should be a regulation that insists that they (those mysterious people who do these things) include on town signs an explanation of how the town name came about.


I love words, and as an extension to that, names. It interests me how much a name can influence how I think about something, without me even knowing what that thing is. I love finding out how names come to be.
But getting back to our trip back from Parkes (named after Sir Henry Parkes, because he visited once).  Since I am the navigator, and as I said, we were on roads I’d never been on before, I had to rely on a map. The only map I had on hand was not very detailed, but good enough – how lost can you get, and we had a full tank of fuel? First stop after Canowindra (Aboriginal word, I’d been there before, and know how to pronounce it) was Mandurama (another Aboriginal word, don’t know how to pronounce it, didn’t know where it was, but the signs were there). All good so far.
But from Mandurama, I needed to get us to Barry (can pronounce it, but why on earth would there be a town called Barry?). Hadn’t heard of it before. Didn’t have a clue which direction it would be in. Thought for sure there would be a sign to point us in the right direction. No such luck. 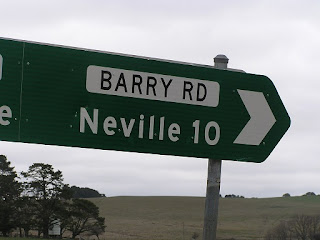 But there was a sign for Neville. Why on earth would there be a town called Neville? Did the townsfolk have a falling out with Barry and become Neville fans? What are the chances I’d be on the right track towards Barry if I directed us to Neville? Turns out, pretty good.


Neville is, in fact, on the way to Barry, when driving west to east. Who knows why they (those mysterious people again) chose Barry to put on the map, but not Neville. The villages are much alike, as their names suggest. They are both VERY small. Neither has anything in particular to make it stand out. Except for the fact that they have names that are not really thought of as town names.
In fact, what else other than a person would be called Barry or Neville? I don’t think I’ve heard of anyone calling even a pet by either of those names.  But the names were very effective in setting my expectations for those villages. And the villages lived up to those expectations.
﻿

How often does that happen? For people as well as for things. I’ve heard of people who had a name picked out for their child, then changed their minds once the child was born, because “he just didn’t look like a Barry”. If they had named him Barry, would that have affected what sort of person he became?﻿﻿﻿﻿
The opposite is also true, though. There is talk around at the moment of changing the names of things as some people may find the current names offensive. One in this area is a road called “Curly Dick Road”. Sure, I had a little chuckle to myself when I saw it, but it is just a name (the road has lots of bends, and a man called Dick killed himself driving too fast around those bends). And it doesn’t change how the road is used. Why change it? Changing the name of something like that doesn’t change the thing.﻿﻿﻿﻿
What is my point? I’m not sure, really. Maybe it is just that I find names, and where they come from, and the way they affect how I think of things, fascinating.
By the way, according to Wikipedia (and I believe everything it says), Barry is probably named after a Caleb Barry who was the former bank manager of Blayney. I’m still searching for a reason for Neville.

Thank you for stopping by. I'd love to hear from you, so please leave a comment.

Just Joyful
New South Wales, Australia
Married, retired, with a nutso cat, and recently moved to the bush - well out of Sydney to a regional area - to live our preferred life!